Match 7 of PKL 7 will see U.P Yoddha meet Bengal Warriors. We will look at the key factors that will decide the contest.

Battle of the best raiding teams?

The match between U.P Yoddha and Bengal Warriors will see 2 raiding heavy weights clash. U.P Yoddha have last season’s costliest player Monu Goyat to lead the attack while Rishank Devadiga and Shrikanth Jadhav make a deadly raiding trio. A little concern for U.P will be the fact that Monu Goyat and Rishank Devadiga suffered injuries last season and were not at their best. It will be interesting to see if they can rediscover the form that made them both unstoppable in PKL 5.

On the other hand, Bengal Warriors are also blessed with a devastating raiding trio of Maninder Singh, Prapanjan and Iranian Nabibakhsh. With such attacking riches on display we might not see many Do Or Die raids. 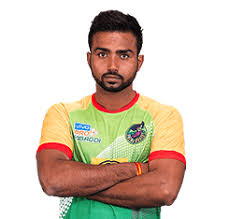 The Case for the defence

With both teams blessed with quality raiders it goes without saying whoever team’s defence does well will emerge as winners. U.P Yoddha almost have the same defence which finished 3rd in PKL 6 barring Jeeva Kumar who will be playing for Bengal. U.P’s defence will be led by Nitesh Kumar who became the first ever player in PKL history to score 100 tackle points in a season.

Former U.P Yoddha left cover Jeeva Kumar will lead Bengal Warriors defence which is short on experience. Right corner Baldev Singh made his debut last year and had a mixed campaign, while Rinku Narwal in his 2 seasons at Puneri Paltan also struggled for consistency, their right cover will also be making his debut. Overall, U.P Yoddha appear favourites due to the experience of their defence.