The PKL 6 ended with Bengaluru Bulls crowned champions for the first time in their history, while the impressive Gujarat Fortune Giants suffered another final heartbreak. PKL 6 saw some brilliant individual seasons by many players. The beauty of this season was the new break out stars that upstaged the established stars. PKL 6 was also symbolic in the sense that many former stars like Jasvir Singh, Rajesh Mondal, Dharmaraj Cheralathan appeared shadow of their former selves and age seems to have caught upon them while “Captain Cool” Anup Kumar announced his retirement. Our team of the season has just 2 established stars in Pardeep Narwal and Iranian Iron man Fazel.

Nitesh Kumar: The young U.P Yoddha right corner enjoyed a stunning PKL season ending the campaign with barely believable numbers. The 21-year old broke several records on the way to being named the best defender of PKL 6. The right corner became the first player in PKL history to score 100 tackle points in a PKL season. His tally of 8 High 5s were also the 2nd most in a PKL season with only Surender Nada having more in a PKL season. Nitesh, the youngest member of the Yoddha defence almost single handedly kept the opposition raiders at bay when many of his senior defenders struggled for form. Nitesh has emerged as one of the most complete defenders of PKL with his vice like ankle and thigh holds.

Pawan Sehrawat: has been part of PKL since PKL 3 but really came into prominence in PKL 6 with a string of superb performances ending the season with 271 raid points, the most by a raider in PKL 6 establishing himself as arguably as one of the best raiders of PKL. Pawan destroyed defences of PKL using his blistering speed to effect hand touches and also possesses dubki and jump to escape the clutches of the defenders. The 22-year old’s impact can be gauged by his superlative performance in the final where he scored 22 raid points against a strong Gujarat Fortune Giants defence single handedly wining a maiden title for the Bulls. The right raiders tally of 12 super raids was also the most by a player in PKL 6 further highlighting his destructive impact. Pawan’s efforts helped him win the MVP award of PKL 6.

Sunil Kumar: was one of the debutants of PKL 5 leading to him being retained by the Gujarat Fortune Giants ahead of huge names like Fazel Atrachali, Abozar Mighani and fellow cover defender Parvesh Bhainswal. Such impressed were Gujarat Fortune Giants by his maturity that despite being in his just 2nd PKL season he was named as Gujarat’s captain for PKL 6. The 21-year old scored 76 tackle points most by a Right cover in PKL 6 and was comfortably one of the best defenders of PKL 6. The defender also displayed impressive versatility by slotting in a number of defensive positions as per the needs of the team.

Patna Pirates failed to reach the play-offs for the first time in PKL history but “The Dubki King” can still hold his head high after another stupendous campaign. The 22-year old scored 233 raid points at an incredible average of around 11 raid points per match. Pardeep’s hand touches, jumps and dubkis proved too hot to handle for the defences. His efforts meant he was named as the best raider of PKL 6. The left raider passes another landmark in PKL 6 when he overtook Rahul Chaudhari to become the most successful raider in PKL history, he now has 858 raid points to Rahul’s 825. The Patna Pirates captain also has 44 Super 10s, the most by a player in PKL history.

enjoyed another stellar campaign proving that his exploits in PKL 5 weren’t one off. The left cover formed PKL 6’s deadliest combination with right cover Sunil Kumar, the duo when attacked together rang the death knell for the opposing raiders. The 21-year old scored 86 tackle points, the most by a cover defender in PKL 6 and only U.P Yoddha’s Nitesh Kumar scored more tackle points. The tall defender is blessed with a deadly thigh hold to go with blocks and chain tackles making him the most lethal cover in the business. His performances in the last 2 seasons means the International reckoning is just a matter of time. 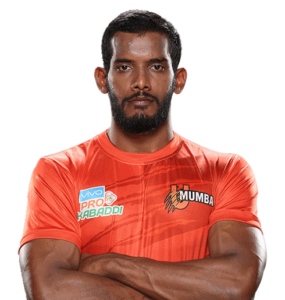 After the auctions U Mumba were expected to struggle in their raiding department with the likes of Rohit Baliyan, Vinod Kumar, Abolfazl Maghsoudou and Darshan Kadian in their PKL careers had proved that they were good enough to be support raiders and not someone who could score Super 10s consistently, it didn’t matter in the end as the tall and lanky Siddharth Desai stepped up wonderfully to lead U Mumba’s raiding department. The Pune native bamboozled defences with his back and running kicks while his power while escaping was unrivalled in PKL leading him to be named as the best debutant of PKL 6. The 27-year old was the biggest factor in U Mumba making the play-offs after 2 seasons and his below par performance in the Qualifier where he managed 7 raid points was the reason in U Mumba’s defeat. However, after scoring 218 raid points in 21 matches including 12 Super 10s and 10 Super Raids 2nd only to Pawan Sehrawat, Siddharth Desai has highlighted himself as one of the stars of PKL.

Find out why U Mumba did not retain Siddharth Desai here.

Fazel Atrachali: Fazel created history when he became the first foreigner to be bought at the auction for 1 Crore Rupees. U Mumba named him as their Captain for the season as he formed an all foreigner double act with Head Coach Gholamreza who was the first foreign coach in PKL. The Iranian “Iron Man” once again enjoyed a spectacular PKL campaign leading U Mumba to their first play-off in 3 years. The 26-year old finished the campaign with 83 tackle points, the 3rd highest in PKL 6. The left corner also became the firsts foreigner to score 200 tackle points in PKL history, the only disappointment for Fazel in a fine season was the fact that this was the first time the former wrestler failed to make the finals of PKL.