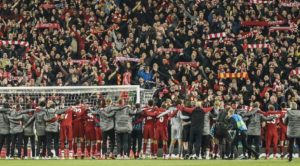 The UCL was welcomed back on Wednesday, there the reds have their 12th men back… the presence of the fans undoubtedly has a very big margin compared to covid season drowning football energy.

The game started well and in the host favor up till the moment where T Alexandra Arnold found fires in a shoot from the right flank hitting former Chelsea and English center back Fikayo Tomori, took the reds upfront . The game continues in Liverpool dominance Robertson forcing Milan center half into another mistake deflection of ball with his hand in the box 18 area gives Liverpool a penalty and opportunity to take the lead to two for the night . Unfortunately Liverpool top scorer in the league and the UCL this time failed to convert to goal. Several opportunities came right after taking the lead in the first half which they failed to utilize until the Italian masters got back in the score sheet beautiful well played football and well struck by Ante Rebic. The game promises to be an interesting game as Milan took permanent control of the possession and forcing Liverpool to defense. Two minutes later Ibrahim Diaz puts Milan ahead and got the game on. Was just like the Istanbul getting Liverpool back into the game well perhaps that’s what’s running through average fans and viewers minds at halftime. 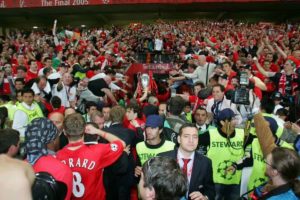 The game started quickly in the second half and gets the tempo high again but then Milan got another goal that makes it 3rd from Diaz again only to be in an offside trap in the build up .
Liverpool puts in the energy they started with and it doesn’t take them forever to get the ball off Origi in a beautiful chip skill to Mo Salah who was on the run and ends it beautifully at the back of the net. 2_2 it was after 4minutes into the second half.
They lock horns till 69th mins then duty calls to the skipper Jordan Henderson who positioned himself well at a very good moment for a well hit volley goal from Trent corner that puts Liverpool ahead deservedly it ended 3-2 at Anfield in front of the kop and Kloop was satisfied seeing the likes of Joe Gomez back on the pitch is a good news for Liverpool