The 4th match of Pro Kabaddi Season 7 sees Telugu Titans take on a star-studded Tamil Thalaivas. We look at some talking points of the match which might decide the outcome of the match

Will Siddharth Desai bounce back against Tamil Thalaivas?

Siddharth Desai had a forgettable outing in his match in the Yellow of Telugu Titans. The tall raider for the first time since his debut had more failed raids (6) than raid points (5). He took until 33 minutes to score his first raid point. He next comes up against the Tamil Thalaivas whose defence consists the likes of Manjeet Chhillar, Mohit Chhillar and Ran Singh who are going to make things difficult for him. But if Siddharth scores against them then the Titans will be hard to beat. 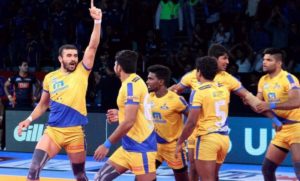 Rahul and Ajay vs Vishal and Abozar

The one thing that Ajay Thakur has lacked over the past 2 seasons was quality support raider, the one thing that Rahul Chaudhari has lacked over the past 2 seasons was a raider to give him support or revive him quickly. On paper this is a match made in heaven both are match winning raiders and close friends who can support each other for the larger interests of the team. It will also ensure both stay on the mat for as much as possible to inflict damage to the opposition. If both get going, then Telugu Titans will have a tough task. But the positive news for Titans fans is that Titans possess in their ranks Vishal and Abozar who have the potential to stop any raider. The outcome of this battle will likely decide the outcome of this Southern Derby. 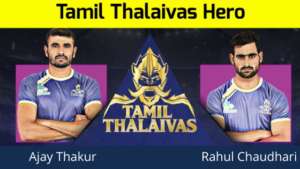