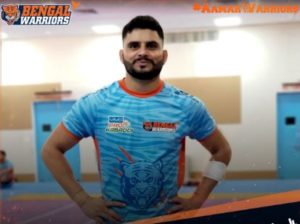 was hit and miss in his debut season for Bengal Warriors but impressed in the Senior Nationals and the Kolkata based team duly retained him.The Himachal native will look to prove his worth for the Bengal Warriors in Pro Kabaddi 2019.

Right In: Nabibakhsh: Bengal Warriors bought Esmail Nabibakhsh for a massive fee of 77 lakhs 75 thousand and the Iranian is expected to slot straight in the starting lineup. 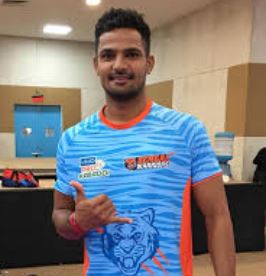 Nabibakhsh starred for Iran in the Asian Games and will look to take the Pro Kabaddi League by storm in his debut season.

Right Cover:  Sahil: Bengal Warriors do not have an experienced Right Cover defender and are likely to give a chance youngster Sahil who is also making his PKL debut. The Kolkata outfit will hope the youngster comes good.

Centre: Prapanjan: Prapanjan impressed for Gujarat Fortune Giants in PKL 6 and was duly snapped up by Bengal Warriors in the Pro Kabaddi Season 7 auction for 55 lakhs. The Tamil Nadu born left raider will form a deadly double act with Maninder Singh.

Left Cover: Jeeva Kumar: Experienced Jeeva Kumar will turn out for Bengal Warriors after playing 2 seasons with U.P Yoddha. The 37-year old will hope to solve which is a problem position for the Bengal Warriors since the start of PKL.

Left Corner: Rinku Narwal: After spending 2 seasons with Puneri Paltan Rinku Narwal was snapped up by the Warriors for 20 lakhs and the Haryana Native will man the left corner for Bengal Warriors.

Sportz Hub - April 7, 2021
0
SWOT analysis Mumbai Indians Strengths No of Matchwinners MI have no less than 6 match winners in their playing XI. Rohit Sharma and Quinton de Kock being...

A tribute to Sergio Aguero: One of Premier League’s legends